come in many shapes and sizes.

As discussed in the home page, the style, size, and type of earth resistivity meter can play an important role in determining its best use. A new Megger Det 4 is shown in the photo next to the red current clamp. Megger states that “The DET4TD2 and DET4TR2 can measure resistance from 0.01 ohms to 20 kΩ, while the DET4TC2 and DET4TCR2 can measure resistance from 0.01 ohms to 200 kΩ, a key capability for soil resistivity testing. Also, to allow accurate testing in noisy environments, the instruments are capable of rejecting noise up to 40 V peak to peak.” While the newer Megger is packaged differently, its specifications are similar to an older product Megger manufactured with Biddle, shown on the DET 5/2’s cover plate in the second photo. 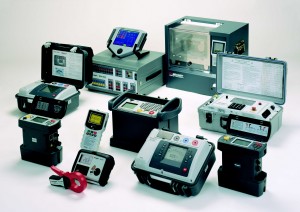 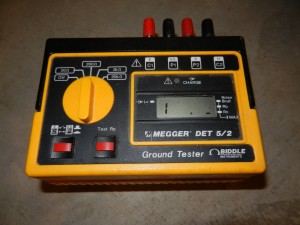 These two Megger soil resistivity meters provide less than 100 milliamps of current. More current or power is needed to investigate soil conditions for a large ground plane or to map the subsurface to 100’s of feet below the ground. Earth resistivity meters like AGI’s MiniSting and SuperSting are capable of providing up to 200 milliamps and 2000 milliamps. AGI states “The MiniSting is a low cost resistivity & IP meter especially designed for small resistivity jobs like electrical grounding-grid testing, soil resistivity test using the Wenner four electrode method, survey for corrosion control, electrical surveys with the four electrode method (vertical electrical sounding or profiling)…The MiniSting is pre-programmed for Wenner, Schlumberger, dipole-dipole, pole-dipole, pole-pole, mise-a-la-masse, SP, resistance and azimuthal surveys in the manual measurement mode. The MiniSting can also be used with…passive electrodes or our down hole electrode cables. The MiniSting/Swift can perform automatic surveys with any electrode array and can also perform surveys controlled by a computer. Recorded data is saved in the internal memory and at a convenient time downloaded to a computer for further processing…Resistivity imaging data and bore hole to bore hole data can be read directly by our EarthImager software to produce brilliant tomographic images in color. The MiniSting has a built in re-chargeable NiMH battery with power sufficient for one day of manual surveying…During automatic surveys when the instrument uses a lot of power, it is normally powered by an external 12 V battery.”

AGI also states that “The SuperSting R8 IP is a state-of-the-art multi-channel portable memory earth resistivity meter with memory storage of readings and user defined measure cycles. It provides the highest accuracy and lowest noise levels in the industry. This new instrument revolutionizes the field of resistivity imaging surveys by its capability to simultaneously measure up to 8 channels using a high power transmitter so that field data production can reach previously unheard of speeds. With the high power transmitter good data can be recorded in difficult locations where time-consuming stacking was the only alternative before. SuperSting R8 IP uses the new Multi-channel … cables. With this new cable it is now possible to efficiently record 3D data and use… about 65000 electrodes! 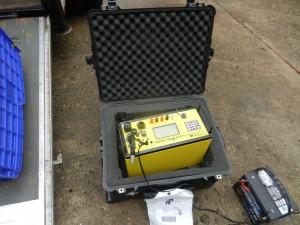